In order for participants to get the most out of a course or field trip, they must enjoy being there. The program content and delivery must be practical, interesting and entertaining! Only then will people learn and, more importantly, retain a large percentage of what they have learned. This is the premise by which all of GeoHistory's courses and field trips are devloped. GeoHistory's lead course architect and instructor is the company's founder, Al Kimmel. Industry experts frequently co-instruct GeoHistory courses and field trips.

Al Kimmel, a Professional Engineer (P. Eng.), Professional Geologist (P. Geol) and native Calgarian, has extensive knowledge of geological play types throughout the Western Canadian Basin. A recipient of the Getty Oil Scholarship, Al graduated from UBC’s Geological Engineering Program and began his career as an Exploration Geologist with Dome Petroleum in 1985. After the Amoco merger Al was hired by Samson Canada, the first Canadian employee in a two man office. In 1998, after several more years with Samson and other intermediate producers, working as an exploration and development geologist, reservoir engineer and acquisitions and divestiture specialist, Al began consulting and pursuing his own oil and gas (and other) interests. Aside from his interdisciplinary expertise within the oil and gas industry, Al is considered to be a leading historical technical expert on the Turner Valley Oil Field and the Turner Valley Gas Plant as well as on the Burgess Shale depositional settings and evolution of the Main Ranges both within and adjacent to Yoho National Park. 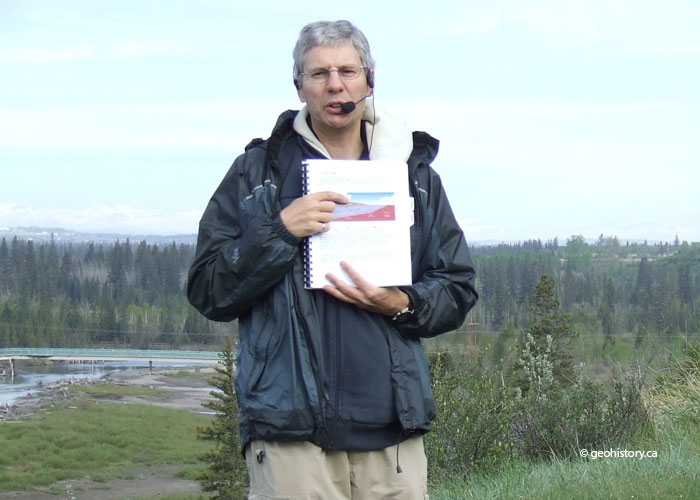 An avid history buff and jack of all trades, Al recognized the need for hands on industry training courses that would benefit junior technical and all non technical industry employees as well as technical personnel. In 1998, GeoHistory Inc. was born with the creation of the Calgary to Field BC, Mount Stephen Burgess Shale Field Course. Other courses followed, including the Essentials of the Oil and Gas Industry Course, the Production and Facilities Essentials Course, the Oil Sands and Heavy Oil Essentials Course and the Evolution of the Oil and Gas Industry Field Trip - Calgary to Turner Valley. GeoHistory’s courses have been part of the internal training program of numerous companies and industry associations throughout the years.

GeoHistory also customizes courses and field trips to meet specific client needs. For example, in June of 2005, GeoHistory developed and ran a multiple day program for the CAPL / AAPL joint convention in Banff. In 2007, GeoHistory was approached to develop a course introducing Calgary's top high school students to careeres in the Oil and Gas Industry. Sponsored by Talisman Energy for the Calgary Board of Education, this annual two day program continued until the recent economic downturn.

Aside from instructing for GeoHistory, Al continues to educate through speaking engagements, including numerous appearances as a guest technical speaker for CAPLA (Canadian Association of Petroleum Land Administration) and other organizations. In 2011, Al finally wrote about the discovery he made on Mount Stephen in Yoho National Park decades earlier - the Field Landslide. In 2012, he was granted a multi year research permit from Parks Canada, resulting in his CSPG Reservoir article (2013-2014) about the Field Landslide and, unexpectedly, new interpretations on the depositional and structural geology of the Burgess Shale and Main Ranges of the Canadian Rockies. These new interpretations seriously challenge extisting geological interpretations that have, in some cases, persisted for over 5 decades. Al's research has resulted in numerous technical speaking appearances for various professional and academic organizations, including the AAPG (American Association of Petroleum Geologists) and AGS (American Geological Society) and several yet to be published technical papers.

A word from Al on oil industry education:

"The paradigm of departmental specialization, be it in the technical disciplines (like geology and engineering), or in the support disciplines (accounting, legal, IT, etc.), has persisted in industry corporate culture for decades. It is my view that a broad, practical knowledge base of the various oil and gas disciplines and specialties is essential for all oil and gas personnel to perform effectively,regardless of their job function. This is especially so during challenging economic times.

I founded GeoHistory in 1998 to facilitate broad based, practical and entertaining industry education, something that I and my co-workers rarely experieced. Further, I strove to produce great industry courses, courses that course participants would fondly remember for years into the future. Has GeoHistory's philosophy been successful? When I am approached by past course participants on the streets of downtown Calgary (frequently over a decade after they participated in a GeoHistory course) and told "you know Al, that was the best course I have ever been on", it leads me to think maybe...."